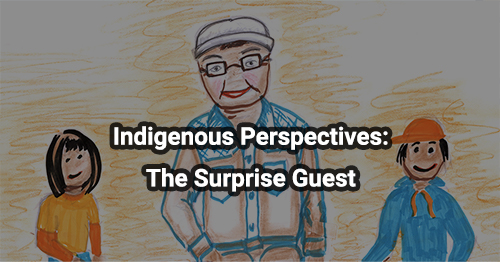 Dani was so excited to go to school today. Her teacher had told them that their class would be joining a few of the other classes. They would be getting together after recess for a special surprise, a guest coming to play the big drum with them! Dani loves everything about music and especially drumming and singing. She couldn’t wait to see who the surprise guest was.

Once everyone was settled after recess Ms. Blanken introduced their guest, “I’m very happy to introduce you all to a dear friend of mine from the Xaxli’p Nation, Elder Fred John. He would like to share some songs with you and a little about his story.” Dani hadn’t met Elder Fred before but she had heard Ms. Blanken talk about him and how he was a respected Elder and a healer. Elder Fred wanted to meet every student before he started. The whole group stood up in a circle while he led them through a smudging ceremony where each of the kids got to use an Eagle feather to smudge themselves. It was really cool! After, they took turns introducing themselves and how they were feeling today. It felt like he really cared about what each of them said.

Elder Fred explained how when he was very little he lost both his parents to a disease called tuberculosis, or TB for short. After his parents died, his aunt and uncle raised him until he was taken away to residential school. He was later put in an Indian Hospital close to the residential school. “When I was 6 years old, I was put into Coqualeetza Hospital, a TB Indian hospital in Chilliwack, B.C., because I had TB in my left lung. TB is an infection that most often affects the lungs and causes severe coughing. I remember walking up the stairs to the hospital and they showed me to my room. I had to stay in bed year after year because at that time there was no medicine to cure TB, only bedrest. When I improved, or seemed to be getting better, they transferred me back to the residential school. To keep a close check on my TB, they kept me at school while the other students went home for summer and Christmas breaks. I lost my sister to TB when I was nine years old. I hadn’t been able to see her since we were taken away to residential school when I was four and she was seven. It was a sad time in my life, but I have learned to always use positive against negative, using negative against negative is so easy. You have to change that. That’s what I tell people. You can’t always do the easy thing.”

Elder Fred brought out his big drum, “This drum is a healing drum. It has the energy to clear what’s bothering a person and help them get back in balance. Drumming played a big part in my healing.” The whole group was so excited to learn they were going to be able to drum too! Everyone took turns sitting with Elder Fred around the big drum. It was such a fun class. Before he left, he gave everyone in the class a copy of his book about his life story. Elder Fred is so brave and wise.

The next day in class a lot of the kids had questions about Elder Fred’s story and TB. “What are the symptoms?”, asked Sandy. “How does a person catch it?”, Taylor wanted to know. “So many great questions!”, said Ms. Blanken, “I’m so glad you’ve all had a chance to read Elder Fred’s book! It’s so good to ask questions and gather knowledge. Maybe we should have Elder Fred back in for another visit to share more of what he knows about TB. I can also gather some information from Rose, the Nation’s community health nurse. Between the three of us we should be able to help answer your questions.” The class felt good knowing their questions would be answered and even better knowing that they would get to see Elder Fred again!

The following week Elder Fred came back to visit the group and he answered some of their questions. He explained that a lot of Indigenous children used to be taken away from their families and forced to go to residential schools against their will. Many children became sick with TB at the residential schools. Sometimes more than half of the school children had TB.  Under the Indian Act, it was legal to take Indigenous children who were thought to have TB and send them to Indian hospitals, where they could be kept away from their families for many years. Some of these children were later found to have never had TB. “I was taken away to residential school before my fifth birthday”, he told everyone. “The stress of being away from our families, along with the crowded living conditions and lack of good food or health care, made it very difficult for our immune systems to fight off diseases like TB.”

Alex’s hand went up. “Yes Alex?”, said Ms. Blanken. “Is there medicine to cure TB?” “Yes, there are now antibiotics that are an effective treatment for the disease. Well, I should say for the most part. Some strains of the TB bacteria have become antibiotic resistant from the general overuse of antibiotics. Thankfully, these strains aren’t very common in Canada but can be in other parts of the world. It is important to promote the wise use of antibiotics if we want to have treatments that will work for future generations. We need to use antibiotics only when they are needed so that bacteria don’t adapt to survive antibiotics. Taking care to use antibiotics responsibly is called antibiotic stewardship. Antibiotic stewardship helps to make sure we will have antibiotics to treat serious diseases in the future.”

Dani asked, “Where did TB come from? Can I catch it now?” Ms. Blanken explained, “TB has been around for thousands of years, and millions of people around the world have died from TB. TB was brought over by the first Europeans during colonization, and it used to be one of the leading causes of death for Indigenous peoples. In the late 1800’s, scientists discovered that TB disease is caused by TB bacteria. They also discovered that TB bacteria in the lungs are transmitted from person to person through coughing and sharing the same air space with someone who has the disease. Nurse Rose shared with me that there are two types: latent (sleeping) TB, and active TB. Latent TB means you have the bacteria in your body but you aren’t sick and you can’t spread it to others. Active TB means that you are sick with TB and can spread it to others. Symptoms (signs) of active TB are severe coughing, weight loss, nighttime sweating, chest pain, and even coughing up blood.  About one-quarter of the world’s population has latent (sleeping) TB.  Luckily, when people have latent TB they aren’t able to infect others.” “Well that’s a relief!”, said Dani, covering her mouth after realizing she had said it out loud. The class giggled.

“Listening to your body to make sure you are getting enough exercise, healthy food and rest will help your immune system keep running strong”, reminded Ms. Blanken. Then they all thanked Elder Fred for sharing his story and he brought out his big drum again.

This lesson was inspired by Elder Fred John and the book written by Monique Gray Smith, “Our Spirits Listen, The Life and Contributions of Fred John” (2014).

Each Indigenous Nation or Tribe on Turtle Island has its own traditional practices. The northern part of Turtle Island uses the term ‘Nation’ and the southern part uses the term ‘Tribe’. Both terms refer to sovereign Indigenous nations that have lived on Turtle Island since the beginning of time, time immemorial. Many Nations or Tribes smudge, but not all, they have their own traditional practices. A smudge bowl is often a large shell, and in the bowl are dried medicines. Once the medicines are lit by a match a smoke is given off, and the smoke from the medicines is good for you. With a feather, or your hands, the smoke is brushed over you.

Elder Fred John is a respected member of Xaxli’p Nation. In “Our Spirits Listen, The Life and Contributions of Fred John”, Elder Fred shares the impact of TB on his life, his healing journey and the wisdom he now has as an Elder. Elder Fred was an Adult Drug and Alcohol Counsellor for twenty years, and the Executive Director of the Aboriginal Head Start Association of BC. Now in his eighties, Elder Fred hasn’t slowed down. You will find Elder Fred on his big drum with preschoolers or spending time with youth, sharing teachings with those living with substance misuse or providing cultural teachings to those in local hospitals. He works with many groups in the Vancouver area, including: Eagles Nest, Singing Frog, Awahsuk, Sheway, Vancouver Native Health Society, and the Broadway Youth Resource Centre.

This was just one of the lessons in our Antibiotics section. There are over 60 lessons on Kids Boost Immunity just like this one on a variety of subjects. Each lesson includes a quiz, and every time a student scores 80% or higher on a quiz, we will donate life-saving vaccines to UNICEF Canada. Sign up now!