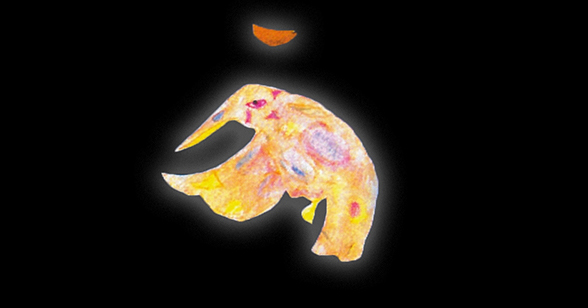 Hummingbird’s Vaccine is a modern story developed by students and community members from Neqweyqwelsten School, Simpcw First Nation, British Columbia, in 2009. The story art was done by elementary students in Grades 1-4.

The story tells how Raven and Coyote play a trick that brings disease to the people in a community, but the community learns to stay healthy through vaccines. Vaccines can't cure people once they are sick, but they can prevent people from getting sick in the first place.

Long Ago the people and the animals worked together and lived in the healthy world made by the Creator.

There was plenty of food for everyone to eat. The adults had plenty of time to speak with the spirits, and the children had many opportunities to play.

The grass grew fast and full and the Rabbit enjoyed eating it. The Fox loved to chase the Rabbit, and the Eagle in turn enjoyed catching the Fox. Everything was as it should be and life’s circle was complete. 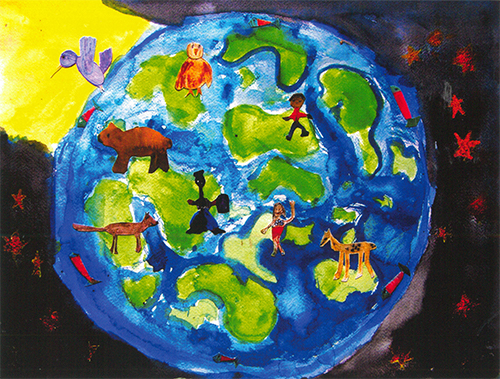 Not everyone was happy about the way things were.

One day, Raven and Coyote met upon the path to the clear river where any creature could drink safely. Raven began to complain that he was being pushed from the village as the people did not appreciate the fact that he cleaned up the village by collecting any pretty objects left lying around.

Coyote complained that he had been forced from the village because the people did not like to hear him cry so late at night.

So Raven, who was selfish and clever, and Coyote, who liked to play pranks, decided they would play a great trick on the people of the village. The people would no longer find joy in any song, and their cries would be heard late at night. 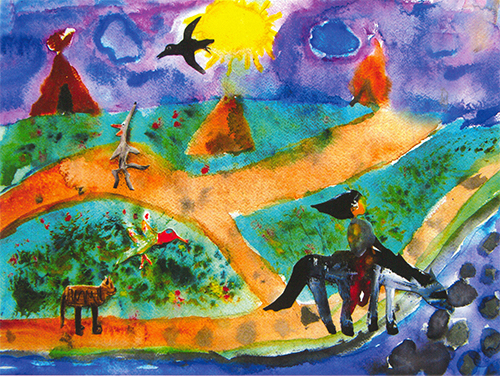 Clever Raven and tricky Coyote planned and schemed for four days and four nights until at last they were satisfied. It was decided that Raven should journey to the deepest depths of the ocean to seek something that would make the people sick. Coyote would deliver the plague among the people and they would watch and laugh from afar.

And so it came to pass that Raven journeyed for twenty-eight days and nights. He returned to Coyote carrying a dark, round package in his beak. 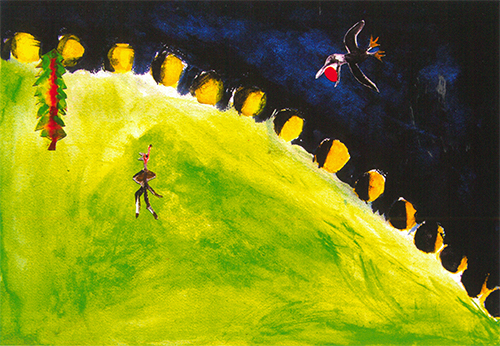 Coyote gently took the package between his teeth and journeyed through the night to the village to find a group of children laughing and playing a game.

Coyote, who was very clever, approached the children and asked to play their game. The children had heard tales of Coyote’s cunning, but quickly forgot the warnings of their Elders when Coyote presented a shiny red ball.

The children began to gleefully chase after the ball. The children were running, shouting, and laughing as they tossed it this way and that way. The children did not hear the Owl cry out in the afternoon sun and no one had noticed that Coyote had not stayed to play. 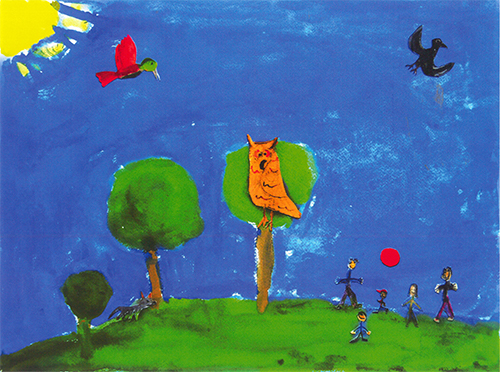 Later that night, as the children joined adults around a mighty fire, something began to happen. The playful children were silent. Their faces were fevered, their eyes were dull, and their lips trembled with despair.

As the night grew later the children became sicker. Many began to vomit and were unable to eat or drink the smallest amount.

The next day more children began to fall ill. The youngest children had the hardest time and many died.

An emergency meeting was held by the Elders and much discussion took place. One of the sickest children was brought forward so that everyone could see how very bad the disease was.

Next day the elders began to fall ill. Soon more than half of the villagers were lying in their homes struggling to stay alive.

On the fourth day, the animal creatures began to notice that the people of the village no longer came to collect water at the clear stream. The morning songs of the village were still and weeping could be heard late into the night. 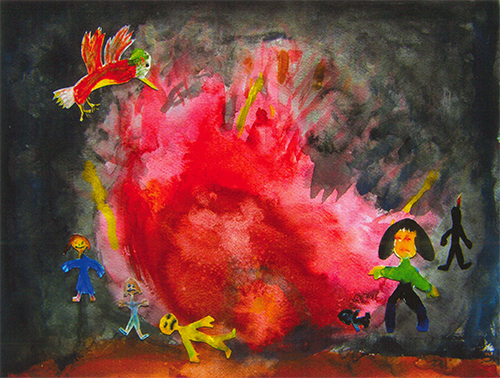 The animals called a meeting to see if they could find a way to help the people. Every animal was invited. When Raven and Coyote arrived with smug smiles upon their faces the animals began to fear the worst.

Clever Raven and tricky Coyote could not wait to brag about their prank on the people. They told of Raven’s great journey and Coyote’s dangerous red ball.

Upon hearing this the animals were dismayed. Coyote and Raven were upsetting the balance of the Creator. They had created a rift in the circle. Every animal present agreed something had to be done.

Bear recalled a story of Hummingbird’s Great Great Grandmother and her magic medicine that could cure all ills. Hummingbird was called forth to share his knowledge.

Many moons ago there was a great plague that killed many people and animals. The cure was found by Great Great Grandmother Hummingbird and it was called “vaccine”. The cure would only work if delivered in a special way.

Hummingbird agreed to seek council with Great Great Grandmother Hummingbird, and to pass on the secret of the cure.

After four days of fasting Hummingbird was able to communicate with Great Great Grandmother Hummingbird. She carefully explained the magic cure called vaccine and how it must be given to be effective. 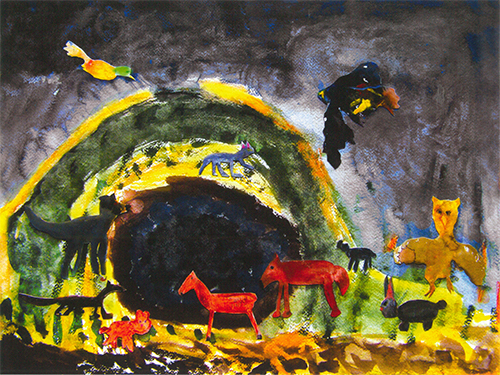 Hummingbird feared the people would be frightened by this vaccine, as the only way to make it work was to deliver it into the muscles of the people. This had to be done by pushing the medicine into the arms of the people using a sharp object to puncture the skin.

Hummingbird approached the village and sought council with those Elders well enough to leave their fires. As Hummingbird had predicted, the Elders were concerned and frightened. They could not imagine a medicine that would make them better if it had to be thrust into their bodies.

The council debated for four days and four nights. They could not decide what to do.

On the fourth night a small child requested permission to address the council. He stood before the elders and told them that he would be the first to try this new medicine because everyone in his family was very sick.

Hummingbird sat the boy in front of the council, drew some vaccine in her beak, and quickly pierced the boy’s skin, releasing the medicine into his muscle. It happened so quickly the boy did not even have time to cry out and he looked at Hummingbird in wonder.

Seeing that the boy was in no pain, the Elders of the council lined up to receive their vaccine in the same way. Soon everyone in the village had received this wonderful vaccine.

Four days and four nights passed. The people of the village regained their strength and their hope. Hummingbird’s vaccine had saved the village. 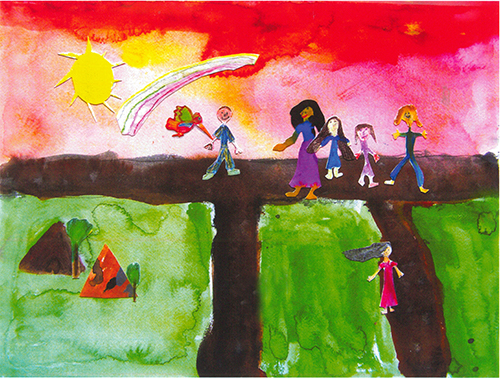 As for Raven and Coyote, they returned to their lives of banishment. To this day Coyote sings his mournful cry of loneliness late into the night. Raven continues to fly by the village and steal pretty objects left unattended. And every so often Raven will return to the deepest depths of the ocean and return with a new infection.

But the people of the village have learned the secret of Hummingbird’s vaccine, and the village remains healthy. 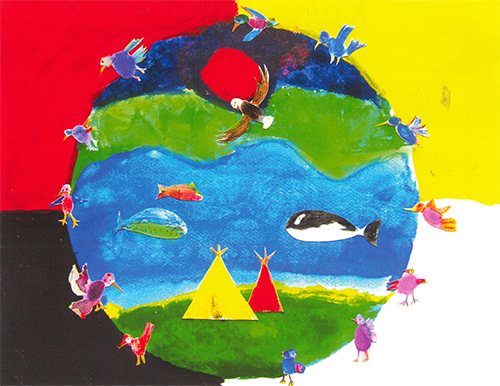