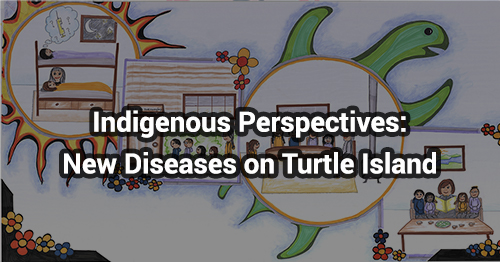 While being tucked in to bed Dani asked, “Kokum why do we have to get a needle next week at school? I don’t want to.” Kokum, meaning Grandma in Cree, replied, “You always ask such good questions Dani.” Kokum then said to Alyssa, Alex and Sandy, “Why do you think you need to have immunizations? Do you think your Auntie Rose is just a silly nurse who likes to give needles?” Everyone started giggling and laughing at their funny Kokum, because they knew their Auntie Rose was really caring. It was kind of cool having your Auntie as the community health nurse. Kokum said, “It’s good you are curious Dani, that’s how you learn. What do you think about us dropping by Auntie Rose’s and Elder Mary’s this weekend?” Everyone nodded their head in agreement.

Saturday came quickly. Dani was the first one ready, slipping on her shoes and pulling her hoody over her head as soon as Kokum said, “Time to go. Get ready! Elder Mary’s house first then Auntie Rose’s house.” Alex grabbed the bags with canned goods, a moose roast and sage for Elder Mary and Auntie Rose. Alex is older, he’s in grade eight. Getting a needle isn’t a big deal for him, or for Alyssa either, but Dani and Sandy are not very keen about the idea.

Elder Mary is way older than Kokum, she’s eighty years old and knows so much about everything. Elder Mary started to speak, “Your Kokum said I should tell you about Turtle Island, and the way it was before.” They all knew they needed to be quiet, patient and listen carefully while Elder Mary shared stories and teachings. Sometimes you ask one question and you get a whole bunch of stories. Sometimes Elder Mary gives you stories about something different than what you asked!

Elder Mary began sharing, “We used to live a very long time. And we were healthy too. The land kept us healthy, our way of life, our medicine people, our teachings and our ceremonies. I was told we lived over a hundred years old. When they first came here they brought diseases that we had never seen before. These diseases hit hard and fast. One of the diseases was smallpox, and it was very bad. There are stories about this that some of the old people know. Things you won’t read about in books, but some of the Elders and Knowledge Keepers know the stories. There are others that know more than me.”

After saying goodbye to Elder Mary, they went a few doors down the road to Auntie Rose’s house. Auntie Rose had a book waiting for everyone that helped answer a lot of questions. They all sat down with the snacks that Auntie had prepared for them, and she started to read.

Then Auntie Rose stopped reading for a moment and explained, “Did you notice there is a letter “s” at the end of Indigenous peoples? The letter “s” signifies the numerous distinct sovereign Nations or Tribes. Many changes came when new people came. One of them was the creation of Canada by the European settlers on Indigenous Nation’s lands.“

“The Europeans arrived in British Columbia in the 1770s. Up until the 1850s, ninety percent of BC was Indigenous peoples. With the explorers, traders and settlers came exposure to many diseases like smallpox, influenza, measles, and whooping cough (pertussis). Indigenous people from all Nations were significantly impacted by these diseases.

The Impact of Smallpox

Smallpox, an infectious disease caused by the variola virus, was one of the deadliest diseases known to humans. Some Indigenous communities had death rates ranging from 50% to 90% of the population with a single disease outbreak. The spread of smallpox was not just from contact between people, but also through contact with items like blankets and clothes that were contaminated with smallpox germs.

During a smallpox epidemic in 1862, instead of isolating people with smallpox to stop the spread of the disease or increasing vaccination efforts, colonial officials forced Indigenous peoples living in the Victoria area to leave. When people infected with smallpox left Victoria, they carried smallpox with them to their Nations’ communities on the coast and to other parts of BC.

In the Chilcotin area of BC a settler threatened the Tsilhqot’in people saying he would bring back smallpox. Not long after, a smallpox epidemic arrived, killing hundreds of Indigenous people within a few weeks. Two men helped the spread of smallpox by taking discarded blankets, ones that had wrapped up people who were sick and dying from smallpox, and selling them to others. By the end of the epidemic, smallpox had killed between half and two-thirds of the Tsilhqot’in people.

Sometimes smallpox was spread intentionally in order to clear the land of Indigenous peoples for the benefit of colonial officials, traders and other settlers. Once the Indigenous Nation’s community members began to die from diseases their land would be stolen.

As a result of the large number of deaths, a Nation’s traditional knowledge in some cases became fragmented. The deaths of so many people from infectious diseases reduced the power of Indigenous Nations. As the colonies grew, they imposed laws and systems of governance that restricted the rights of Indigenous people to their Nation’s land, cultural practices and language.

Indigenous peoples’ Nations are still here, as are their cultural teachings. Today, there are approximately 200,000 Indigenous people living in BC, and there are more than 200 Indigenous Nations in BC, each with their own political systems, traditions, languages, and history. Strong connections to culture, language, land and ceremony are critical to health and wellness. Elders and Knowledge Keepers in Indigenous communities are still sharing their traditional knowledge of ceremonies, plants, animals and healing practices.”

Auntie Rose then stopped reading and began to share, “As Indigenous peoples we adapt, while still following our teachings. Instead of beading with bone and pieces of shell I buy beads already made at the store or I use a lighter to start my smudge bowl. Now I am a nurse and I still practice the traditional teachings taught to me and I also use western medicine. I learned about vaccines at nursing school and I also know how badly diseases like smallpox have impacted our people. I believe it’s very important to keep up with our immunizations.

Did you know that because of global immunization efforts, the world became free of smallpox in 1980? Immunization has saved more lives in Canada in the last 50 years than any other health measure. So, if you still feel worried about having immunizations talk to some of your older cousins about their experiences and how it was for them. When you go to school this week and it’s time to get your immunizations just remember the history. The global community has come a long way. We all need to do our part in making sure we stop the spread of diseases that are still out there, like polio and measles. These are diseases that we can get rid of through immunization, just like smallpox.”

This was just one of the lessons in our Diseases and Outbreaks section. There are over 60 lessons on Kids Boost Immunity just like this one on a variety of subjects. Each lesson includes a quiz, and every time a student scores 80% or higher on a quiz, we will donate life-saving vaccines to UNICEF Canada. Sign up now!