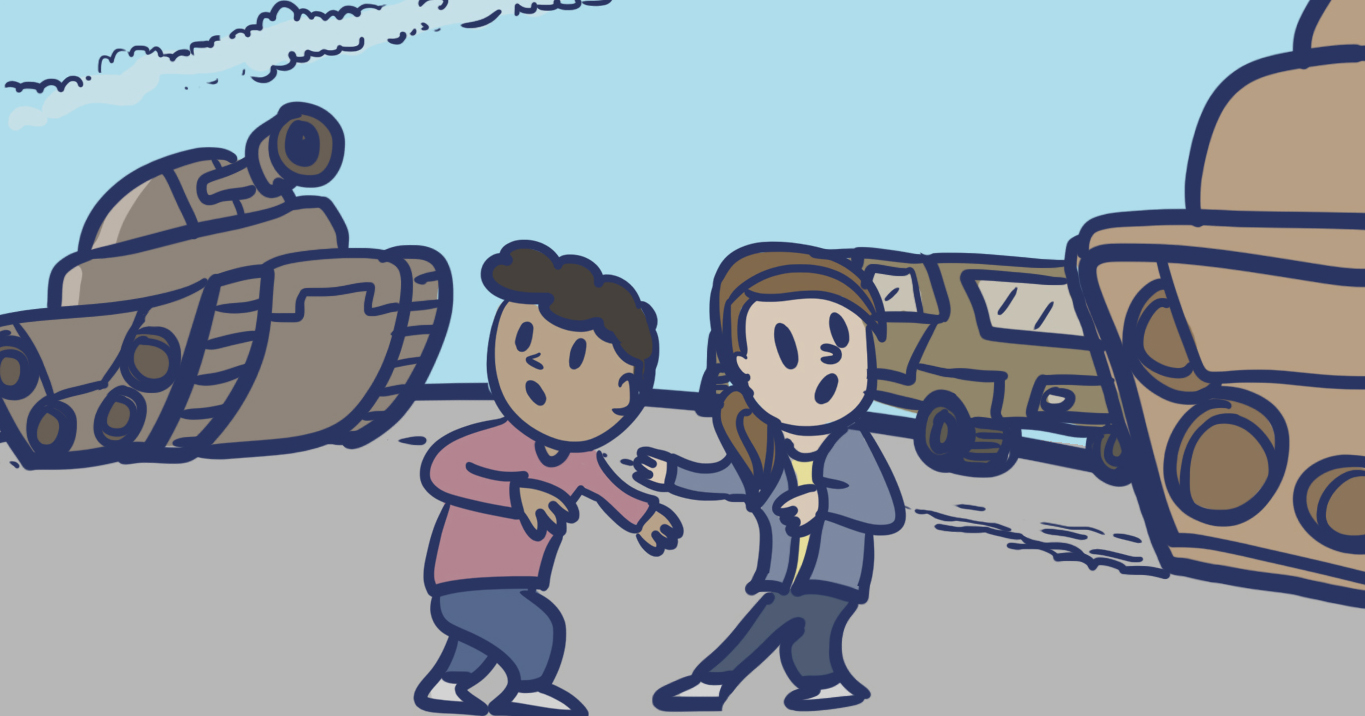 War and violence make it difficult to vaccinate children in certain parts of the world. In this lesson, we will examine the challenges that war brings when it comes to accessing vaccines. Let's look at the war in Syria as an example.

When did the civil war in Syria start?

The civil war in Syria started in 2011, and it is still happening today.

What is the war in Syria about?

The war in Syria started as a battle between those who were for and those who were against President Bashar al-Assad. As an authoritarian ruler, al-Assad did not allow the people of Syria to have democratic freedoms. Ordinary people did not have basic privacy, as the government watched and kept track of them. The government censored those with opposing views and even sent them to prison. At the same time, the economy was weak and many people struggled with poverty. They were part of the widespread Arab Spring protests and rebellions taking place throughout the Arab world.

The war in Syria has been going on for over 10 years, and it keeps evolving. There are now conflicts between religious groups, ethnic groups, and terrorist groups. Several other countries have become involved over the years, including the USA, Russia, Iran, the UK, France, Turkey, Israel, and Saudi Arabia. Some of these countries are directly involved in the conflict, some provide political support, and some supply weapons.

How have people in Syria been affected?

“Children inside Syria tell us that they feel hopeless. They have witnessed their friends and families being killed. Their homes are now rubble. They are hungry, often sick. They can’t find clean water. Hospitals are barely functioning. Even if their school is still standing, it’s probably far too dangerous to attend.”
- Save The Children

You might not hear about it as much anymore, but the war in Syria is still one of the worst humanitarian crises in the world today. As of July 2022, more than 600 thousand people have been killed or are missing as a result of the war. More than 2 million people have been injured and now live with permanent disabilities.

It can be difficult to visualize these overwhelming numbers. To put them into perspective, let’s compare them to provinces in Canada:

More than 600,000 Syrians have been killed or have gone missing.

More than 13.5 million Syrians have been forced to leave their homes because it was too dangerous to stay.

Keep in mind that fleeing one’s home involves many risks. Refugees must cross war zones, often without transportation or access to food and water. Many people have died in the attempt. Even for those who flee safely, life is not easy. Belongings get left behind or destroyed, and refugees usually end up in a country where they don’t speak the language or have many rights. They arrive without jobs, food, shelter, or money.

As of 2021, Canada has welcomed more than 74,000 refugees from Syria. These refugees have escaped from some of the most dangerous situations in the world. They have had to be smart, resilient, and courageous, just to survive. As members of our society, they make Canada a better country.

To hear from some of the children who escaped Syria, watch the video below.

How is war affecting the vaccination of children in Syria?

Given what you’ve learned about the civil war in Syria, it’s not hard to understand why vaccinating children in any war zone is difficult and dangerous. There are other wars going on right now too, like in Ukraine and Yemen, and they also face the same issues getting vaccines to children. You might wonder why it is a priority to vaccinate children during a war. The lack of proper sewage systems, clean water, and access to healthcare in a war zone make it easy for deadly diseases to spread quickly. This is why so many aid organizations in and around Syria make vaccination a priority.

Let’s take a closer look at how the war in Syria has affected the immunization rate:

This drop in the immunization rate has resulted in outbreaks of vaccine-preventable diseases such as polio. After 15 years without a single case of polio in Syria, an outbreak was confirmed in 2017.

War has devastating effects across all aspects of society. Its impact on immunization rates is one of them. Two-thirds of all unvaccinated children in the world live in countries affected by conflict. All of the reasons for inequalities in immunization (which you learned about in previous lessons) apply in conflict zones.

Vaccines are often unavailable, and health services can be damaged or difficult to access.

Doctors and nurses might not be able to move around easily, and they might get attacked or killed travelling in a war zone.

People usually lose all of their possessions when they flee their homes. Jobs disappear, leaving people with no way to make money which forces them into poverty. Children who don’t receive an education can get stuck in a poverty trap.

Families might not be able to access information because telephones, internet, TV, radio, and other methods of communication are usually damaged. This makes it difficult to find out why immunization is important and to schedule a vaccine appointment.

Sometimes, warring groups believe that healthcare workers are spies, or that vaccines are dangerous, or that children shouldn’t get vaccinated because they are part of the enemy.

Hospitals and healthcare workers can become the targets of attacks because they help wounded enemy soldiers. In Syria, hospitals are attacked so often that many people are afraid to go to them.

Immunizers such as doctors, nurses, and volunteers have been killed while trying to reach children in war zones. Between 2011 and April 2022 in Syria, there were at least 601 attacks on 350 medical buildings.  These attacks killed at least 923 doctors, nurses, and other healthcare workers.

Unfortunately, other wars are happening right now too. That means that millions more children worldwide can’t access some types of healthcare like vaccines. You may have heard about the war in Ukraine recently. The people there face the same problems and dangers that you learned about in this lesson. Healthcare facilities are attacked, medical supplies are hard to find, and immunizers risk their lives getting vaccines to people who need them.

Ukraine has had a big increase in polio cases since the start of the war, and the country declared a public health emergency to try and stop the spread of the deadly virus. Polio can be prevented with vaccines, but the war makes it very hard to get the life-saving vaccines to many parts of the country. Just like in Syria, it is clear that war and conflict impact more than just an army or a government. The lives of regular people become much more difficult, and the services they rely on (like healthcare) become more dangerous.

Despite all of these dangers, people still risk their lives to vaccinate children. Watch this video from National Geographic to see how far some healthcare workers will go to protect children in Syria.

More than 8,000 volunteers participated in the campaign shown in the video. They vaccinated 1.4 million children in some of the most dangerous places in Syria. Thanks to these courageous vaccinators, Syria was able to stop the polio outbreak in December 2018.

Why do you think that volunteers continue to risk their lives by immunizing children?

This was just one of the lessons in our Global Inequality section. There are over 200 lessons on Kids Boost Immunity just like this one on a variety of subjects. Each lesson includes a quiz, and every time a student scores 80% or higher on a quiz, we will donate life-saving vaccines to UNICEF Canada. Sign up now!